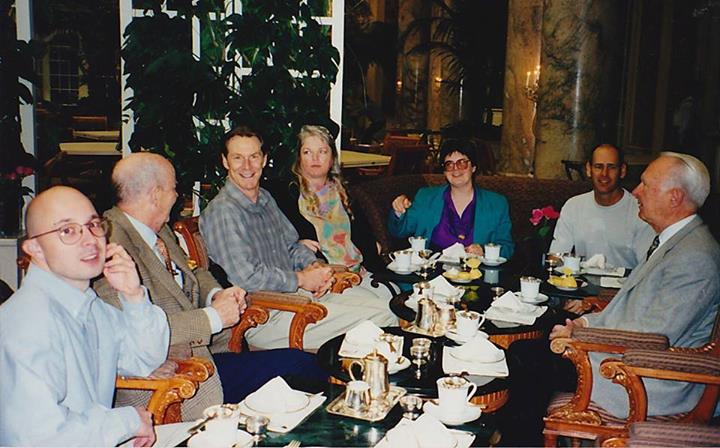 Editor’s Note: OneWheaton has been successful in part because of those who came before us! This is a special post that I hope will continue to grow over the next couple months. Were you a member of WCGALA? Can you contribute a story, anecdote, photos, or further details to our history? Email untold@onewheaton.com.

Preamble.  History is subjective.  I apologize in advance for any omissions/errors due to my faulty/aging memory.  Also, there are WCGALA members–now OneWheaton members–who I would love to recognize and thank by name but I still feel bound by the confidentiality code to which we committed ‘back in the day,’ even as times have changed and those folks probably wouldn’t care anymore.  As for WCGALA’s leadership, I have named those people here because, as leaders, they were always ‘out.’ They also worked their butts off so recognition is absolutely in order.  WCGALA was something really special in its time.  OneWheaton is incredibly special now.  There is every reason to be incredibly hopeful.

Late 1980’s – early 1990’s.  Paul Phillips ’76 was a member of the gay musical duo Romanovsky & Phillips who were notable in the gay entertainment scene during this period.  Paul included references to his Wheaton experience in his performance patter.  Sometimes gay alums would come up to him after his shows, often amazed and thrilled to find in Paul another person who understood their life experience.  Addresses would be exchanged and often, they wrote letters to Paul pouring out their stories.  Paul, in turn, requested/received permissions to share these letters with others on his growing address list.  A rudimentary newsletter was born, compiled by Paul at his own expense, on his own schedule.  Paul was especially motivated by a story that came to him about a suicide on campus. A Wheaton student, rumored or known to be gay, had committed suicide by lying down on the RR tracks near campus, in front of an oncoming train.  Paul himself had come close to doing the same thing when he was a student.  So this story stirred up intense feelings in Paul.  He channeled his emotion into community building among the people on his mailing list in the hope that maybe somehow, together as a group, they could prevent such a thing from happening again.

1992.  A Gay & Lesbian March on Washington was planned for April 25, 1993.  Seizing on this opportunity, Paul placed ads in gay newspapers around the country soliciting gay alums of Wheaton College, Wheaton, Illinois to come together socially in DC that same weekend.  Paul put his name and home telephone number in the ad.  If one wanted to participate, calling Paul was the thing to do.

1993.  About 40 lesbian and gay alums gathered for 2-3 hours in the lobby of a hotel on Dupont Circle in Washington DC. on the Saturday morning of the weekend of the march.  The atmosphere was, it is safe to say, giddy.  Paul arranged for the space and refreshments.  Three of us were women, the rest were men.  The age range was mostly people in their 30’s and 40’s at the time.  As folks arrived, in classic WC fashion, they spontaneously pitched in to help Paul adapt the hotel lobby space for this social gathering.  I remember Paul joking, something like: “Well look at us.  The men are decorating and the women are moving furniture.”  I remember the laughter in that moment.  Partly a reaction to Paul’s words.  Partly a collective, ‘I can’t believe I’m with a bunch of people from Wheaton and we’re all sharing a gay humor moment.’  For context, in 1993, the AIDS epidemic of the 1980’s still loomed large in our lives.  Many if not most of us were closeted to some degree.  Clinton & Gore had been in office just 90 days.  The hot issue we’d be chanting about in the march was what later devolved into Don’t Ask Don’t Tell.  There were no out gay characters on TV.  PC’s were not yet commonplace.  An email address was a rarity, even a bit of a status symbol.  At Wheaton, Richard Chase’s presidency was ending and Duane Litfin’s term was beginning.  Most of us had attended Wheaton during the presidencies of Chase or Hudson Armerding.

1994.  The Gay Games were scheduled for June in New York.  I contacted Paul early in the year and suggested we pull folks together again but this time, organize.  Paul supported this idea.  My gay-friendly Episcopal church in midtown Manhattan was willing to let us use their parish hall.  Refreshments were served.  Our gathering was part social, part group-venting about the college and part organizational.  There was general agreement that we should organize and try to do whatever we could to try to get the college to ‘get it’ better for the sake of the still-suffering students on campus and still- scarred queer alums.  Someone volunteered to donate money to cover the cost of our newsletters, a cost that was becoming burdensome to Paul. As I recall, it was about $200 per quarterly issue–$800/year.  I’m not sure if it was at that meeting or shortly after that we chose a name for ourselves.  The address list, it was understood, was highly confidential.

1994 – 2000 (?).  This was pretty much the lifespan of WCGALA.  Tom Hunt Brooks ‘86, who majored in Communications at WC, had access to what was then fairly cutting edge publishing software that professionalized the newsletter in look and feel.  I helped generate content for it and did everything else—all manner of organizational and administrative work.  Approximately halfway through 1997, Tom needed a break and Jay Emerson Johnson ’83 replaced him as the newsletter producer. (I continued to participate in generating content.)  We were never highly organized (no bylaws, no 501-3c, etc.).  We had a PO box.  There were a handful of regional gatherings.  Some of us in New York City attended a college sponsored alumni gathering in Manhattan wearing our triangle buttons and rainbow gear and asked President Litfin some questions during the Q&A.  We conducted a paper-by-mail survey of our membership to learn more about ourselves, especially to better understand where folks were at regarding faith. (As I recall, about 40% of those responding, as many or most did, had left Christianity, or felt it left them.) As a group, we did some political agitating against the college by bombarding their fax machine with messages on one particular day.  (I can’t remember what specific point we were trying make.)  Our relationship with Wheaton was very angry and adversarial, reflective of the times—AIDS, Act-Up, “Silence Equals Death,” all that.   (There are most definitely deceased Wheaton alums who died as a result of HIV/AIDS.) The Litfin administration’s response to us was very ‘circle-the-wagons.’   Our membership grew from about 85 people on Paul’s original list to about 125 members–something we were very proud of because it was hard for people to find us and hard for us to make ourselves find-able.  A tiny number of straight allies found and joined us.  Paul kept tabs in a kind of advisory capacity but was otherwise happy to let folks with fresh energy, lead.  I believe but cannot prove that we had a ‘double agent’ in our midst who told the WC administration everything that we were up to.  Today, one might not care about that so much but back then, information shared within our group was something to guard with extraordinary care.  We joined NetGALA, a network of lesbian and gay college alumni/ae associations all over the country.  We also had friendly relations with Evangelicals Concerned, a group of gay evangelicals founded by Ralph Blair.  Mel White, who was in the process of founding Soulforce, contacted us for advice on how to deal with Wheaton when they visited there.  Mel also had a company that hosted our very basic website approximately 1998-1999.  A few times, we got some press.

Fall, 1999.  A small handful of us attended Homecoming on campus.  We simply joined in our regular class gatherings as openly lesbian and gay people and regrouped in between our class activities to compare notes and take deep breaths together.  We wore our triangle buttons and rainbow paraphernalia to the degree each of us was comfortable.  Also we sported WCGALA buttons freshly minted for the occasion by one of our members.  Our button said simply: “Neither sponsored nor sanctioned by Wheaton College, Wheaton, Illinois.”  The story behind this button was as follows.  Perhaps a year prior to this homecoming, the college had contacted us and threatened a legal challenge over the fact that their name was embedded in our name.  One of our members–an attorney–looked into trademark law/precedent and recommended that we always add that statement under our name on all future written material.  We informed the college we were doing that and they went silent on the matter.  That statement became its own subversive self-descriptor to wear as individuals walking around on campus.  Following our day of being out on campus and coming out to all our classmates, we gathered at a gay bar in Chicago, joined by other WCGALA members from the Chicago area who were not on campus that day.  This was a regional gathering of about 10 people with a lot of ‘how did it go?’ buzz regarding this, our first (and last) WCGALA homecoming effort.

Spring, 2000 (?).  Almost at the same time, Jay and I ran out of gas and with that, WCGALA stopped functioning.

Social media came into being.

New history, healing, and hope are being brought about by new people.  I am in awe of their wisdom, love and talent.

There is every reason to be more hopeful than ever.

My experience as a gay man at Wheaton was probably quite different from most. By my senior year (’70-’71), I was “out” to my dear straight roommate and most of my close friends, and I was not alone. There were quite a few of us. We were pretty obvious, but everyone just assumed that our flamboyant behavior was because we were music and theatre majors…not to worry.

When my roommate graduated a quarter early, I managed to move a non-student “friend” from Florida into my Tower Dorm room. Sure, they wanted to charge him the (at that time $5) linen fee, but since we had taken the bunk beds apart and put them together, I bought king-size sheets and no longer had a need for the provided linen service. The RA should have reported us, but my bedmate, Tom, provided haircuts for the guys on the floor, so no problem.

Fast forward to 1992. I met Paul Phillips after a “Romanovski & Phillips” concert and learned that he was working on starting a Wheaton Gay Alumni group. I signed up, and we had an organizational meeting in New York during the 25th anniversary of Stonewall in 1994. Deborah Twigg was the facilitator. Wheaton College Gay & Lesbian Association (WCGALA) was born. After lawsuit threats from the College, we agreed to include, “Neither sanctioned nor sponsored by Wheaton College,” on everything. Hence, my creation of our first Reunion logo (see above).

I never even considered attending my 1996, 25th Wheaton reunion, but now there was a reason. Maybe we could be of help to past and present students. No facebook/twitter…just email addresses, and we got 20-25 RSVP’s. Here’s my recollection of the weekend:

Thursday: Cocktail Reception at my home in Chicago.

Friday: Taking over a booth in the Stupe with a poster and greeting alumni and current students.

Saturday: Time at the booth and lunch at Cock Robin (70’s hangout) followed by a night out at “Gentry” in the city. 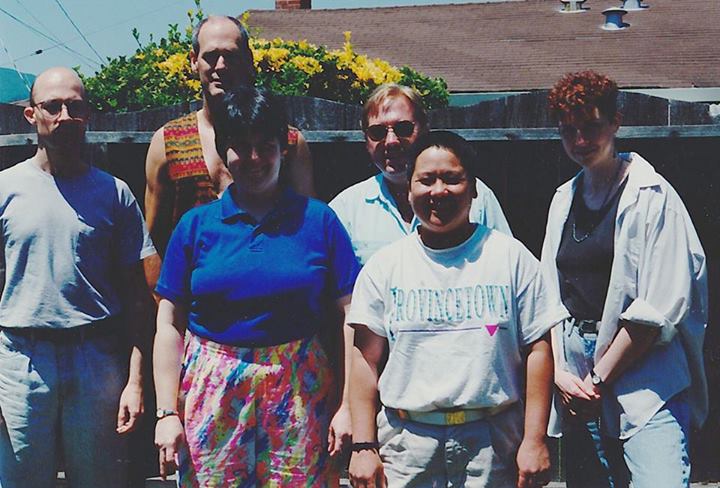