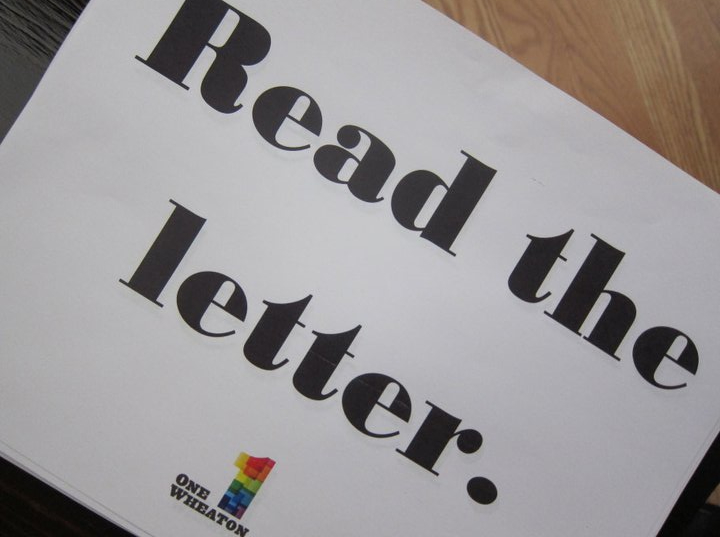 Do you remember the letter handout?

I remember being handed a letter. I was walking around campus with another LGBTQ friend (we were both out to each other at the time). I don’t remember who gave me the letter because I was too afraid to talk to anyone in OneWheaton then. I didn’t want to be publicly associated with the “gay people” on campus because I was worried what people would think of me. Even though we were both really curious to meet you all, we were too afraid to walk up to you guys and start talking on campus so I worked it out to meet up with you later.

Do you remember any conversations with friends about 1W?

I think I only talked about it to people who I was already out to, although I heard a lot of people talking about the letter and saw many people standing around in groups reading it.

So you met up with 1W folks later. What happened? What was that like?

The conversation with 1Wheaties at lunch was amazing. I’m so glad I went to that lunch. When I first walked up to you guys in the park I felt like I was barging into your group because you all knew each other. But by the time we got to the restaurant I realized this was a group of people who got it, who really got it and who I didn’t have to worry about being misunderstood by.

I felt an automatic sense of community and was very comfortable right away. Almost like I could sense that I belonged there. At our end of the table, people all shared their stories about how they dealt with sexuality while at Wheaton. It was encouraging to hear from people who had gotten past their Wheaton days and had a comfortable understanding of themselves. It was really encouraging to talk to people who viewed their sexuality in a positive way. That conversation was really encouraging; definitely a positive experience.

Did the event have an impact on you? How so?

I remember when my friend and I talked about the 1W letter drop later. It gave us hope that this would change our experience at Wheaton and excitement at the prospect of getting to know [people involved in 1W] better. And by having another force at Wheaton besides the administration, it felt like there was potential and optimism. It definitely had an impact on the student body in terms of people talking about sexuality and with the way they talk about it.

For me, [the presence of 1W] allowed me to talk to my sisters a lot more openly. They really got behind the Day of Silence event this year. That wouldn’t have happened without 1W. Talking with them about the relationships I was building with 1W allowed me to connect with my sisters in a way I hadn’t before.

Even though 1W is mostly alumni, it was helpful to know there were people who were supportive of me even if they weren’t on campus. I just didn’t feel quite as alone in my experiences.

Next up: Hear from an ’00 grad who flew in for the handout