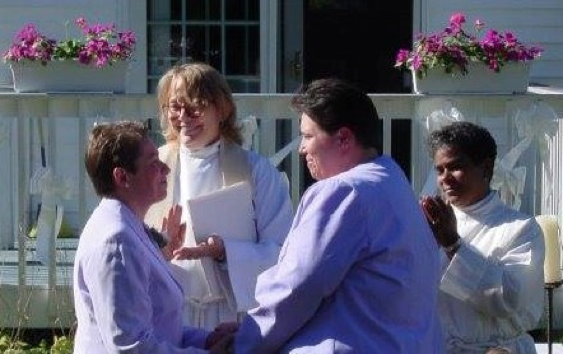 We had planned for a year and a half this 9/15/01 wedding to take place in our Episcopal church in Manhattan but 9/11 changed all that.  We spent the first 24 hours in complete shock: a member of our wedding party worked in the top of Tower 2 and survived the ordeal. Our friend Chris, the deacon standing next to the taller priest, called us and suggested we go forward with the wedding and do it in our backyard in the suburbs an hour NW of NY City.  While also working full-time that week, and still in shock from 9/11, in 2 days, we cancelled everything in Manhattan and put together a complete 1:1 replacement using new vendors where we lived who, upon hearing the story of our plight, took on their parts of our wedding on such short notice as if it was their personal fight against terrorism.

I asked the priest what she would possibly preach to this crowd of various faiths or non-faith at a wedding 4 days after 9/11.  “Don’t worry, I’ll think of something,” she assured us.

One can only do a complete change of wedding venue so quickly with the help of many people.  Everyone who pitched in and helped was awesome.  As the reception tent went up in the backyard we ended up coming out to the entire neighborhood overnight. The neighbors (who we had barely known before) surprised us with all kinds of wonderful support.  The weather was great; the guests all found their way to our home; the non-car-owning city people who came by train were picked up by friends at the station.  Those who could no longer fly in (planes weren’t flying) sent their love from afar.

The sermon was absolutely amazing.  Her point:  the best antidote to terrorism is ordinary life, well lived…so carry on with your ordinary lives…get married, have kids, make a home and life for yourselves…be not afraid.  Standing next to the priest, we administered the bread and wine and as everyone went through the line (receiving or politely not receiving), that became its own very emotional hug and kiss reception line.  Many said it was the best wedding they had ever attended.  They thanked us for not canceling it under the circumstances and for giving them the first moments of joy they had felt since that horrible Tuesday four days before.  Our friend from Tower 2 was there.  So was another friend who worked at World Trade Center 7. She lost her shoes running north on Broadway.  It wasn’t just our lives that were being celebrated.  It was very poignantly life itself.