How a Middle aged Mom from Missouri became a LGBTQ Ally 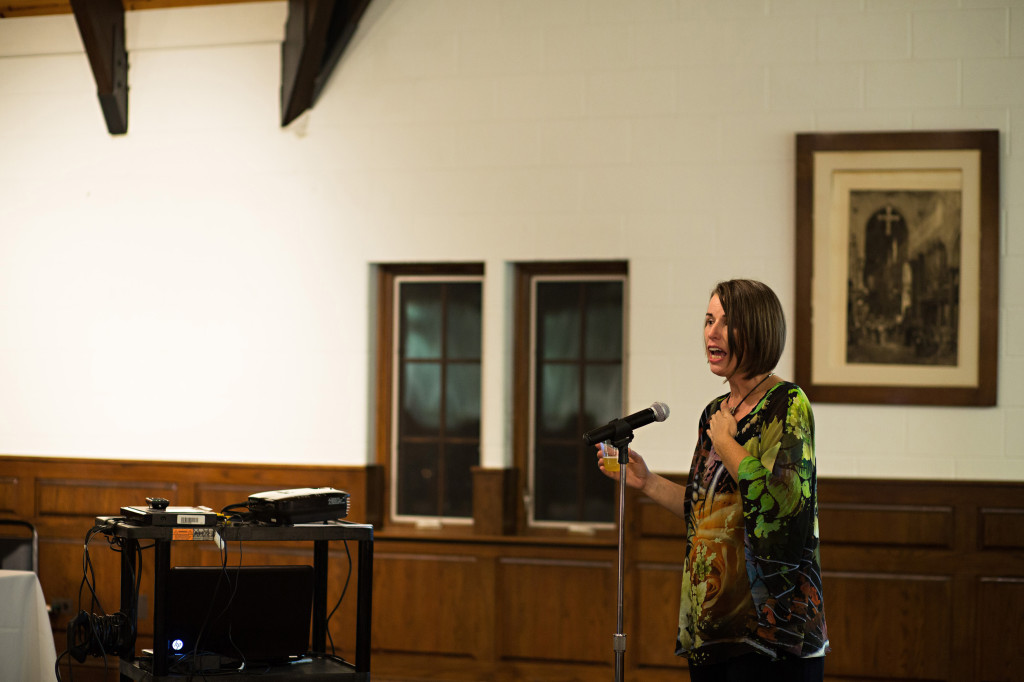 When we speak we are afraid our words will not be heard or welcomed. But when we are silent, we are still afraid. So it is better to speak.  –Audre Lorde

This is the story of why I organized the OneWheaton/1 Wedding Album for our 2013 homecoming celebration.

Wheaton was a wonderful place for me. I met my husband there and formed lasting friendships. Despite my fond memories, I realize that Wheaton has not been as hospitable to its LGBT graduates. Because I’ve always loved Wheaton College, I never expected to belong to an alumni organization that would go unrecognized by its administration. OneWheaton exists to provide a community for the LGBT alumni and students of Wheaton College, as well as the people who care about them. Three homecomings after its founding, it has yet to be welcomed home by the college.

For many gay and lesbian Wheaties, returning to campus is difficult because they remember some of their time in college as a time that they were silenced. Zach Spoehr-Labutta articulated this sentiment in his entry for the wedding album: “We were silenced due to fear of rejection by friends and family. We were silenced lest we be kicked out of Wheaton. And we were silenced because all faith told us was that we were unfortunate evidence of the fall at best, and hell bound abominations at worst.” This year’s theme honored the marriages of OneWheaton members in the wake of the Supreme Court cases involving DOMA and California’s Proposition 8. In celebrating this year’s homecoming, I wanted the OneWheaton/1 Wedding Album to be a safe place for LGBT alumni, a place to send in their stories without the fear of silencing and rejection.  I have seen firsthand how silencing hurts.

In 2008 my son entered this world. Two months later, my friend Carolyn gave birth to her daughter. Two birth announcements were sent to the Wheaton alumni magazine. One was published in its entirety, listing both parents and child. The other appeared after months of delay, and omitted the same sex parent of Carolyn’s baby.

Saddened by Wheaton’s actions, Carolyn’s friends mounted an email and letter writing campaign. It was ignored, a clear indicator that LGBT parents are not welcome at Wheaton College.

It has been said that, “when truth is replaced by silence, the silence is a lie.” I am happy to say that my friend did not let the Alumni Magazine’s exclusion end her story. She wrote the editor a second letter, inquiring about her daughter’s birth announcement and the emails sent by her friends and fellow alumni. The editor acknowledged receiving all correspondence. I have no knowledge of the internal dialog that went on at the alumni magazine or at the College level. I know many who work on the magazine to be good kind people in their personal lives.  I only witnessed how their action, erasing a parent and partner’s name, injured my friend. That is why I and others spoke out.

I am proud to say that my friend’s wedding story is published in the album unedited.

More than anything, I want the stories in this album to be read. I have always told my boys that it is love that makes a family.  In reading the stories of my fellow OneWheaties, this truth shines through.  I had the great honor of being the first eyes to see these stories in their final collection. Eighteen couples shared their love and lives with me and our community. These couples’ relationships share many of the same characteristics of other Wheaton marriages—love, commitment and fidelity. 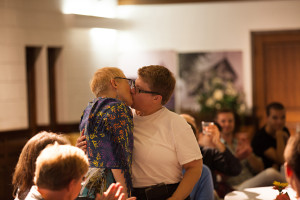 I organized the album because I love this online community.  On the pages of facebook I have found some of the dearest friends I know.  I wanted to honor them and their relationships. My twenty year marriage has never been without cultural and legal recognition, but not so for my friends.  One entry written by Mark is especially meaningful to me. I would not have met him without OneWheaton.  In many ways we have lived parallel lives. We both found our respective spouses in the winter of 1991 (and for Muppet fans he is the Statler to my Waldorf). He wrote, “Getting married, to me, was a validation of our 20-year relationship.  We chose to have a simple ceremony before a judge with just a few witnesses as for all intents and purposes we had felt married for years.” I wanted to honor his and all Wheaton College marriages.

Simply living your life is the best response in the face of fear.  Two couples’ stories are connected through life events and friendship. The friends are Paul and Deborah.  Four days in September connects both of their love stories. On September 11, 2001, Paul received a cellphone call from his partner Tom, he is in the stairwell of Tower Two. They talk briefly. Five minutes later, the second plane hits the tower Tom is in. Paul writes of that day: “For the next few hours, I grappled with   and walked around in a daze, frozen at the likelyhood that he was dead….Three hours later, Tom walked into my uptown office without a scratch on him. He held it together on the walk there, but once he saw me, he fell completely apart.  Three days later Paul and Tom attended Deborah’s and Mia’s backyard wedding partaking in the bread and wine.

The appeal of OneWheaton homecoming is meeting face-to-face without the mediation of pixels. The opportunity to hug the people we have learned to love online. This is the tangible beauty that is an OneWheaton reunion. Yes, together we belong. 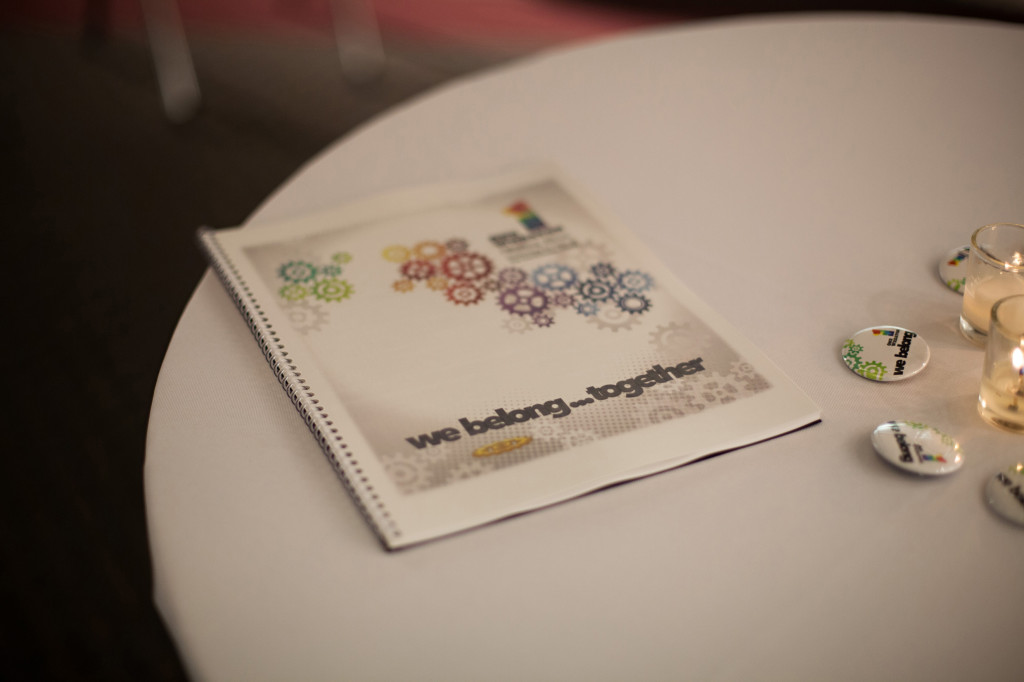 Zach wrote: “We found our voices again through acknowledging the reality of our sexuality, embracing that we are beloved creations of God, and letting His iconoclastic nature speak where tradition and prejudice had formerly reigned.”  I was so blessed to hear him articulate the truth of his marriage to Andy during Friday night’s panel at St. Mark’s Episcopal Church.  I had the pleasure of talking with Andy at the reception afterwards. When I stood up to toast the couples who sat before me, tears came because the commitments I witnessed on the pages of this book touched my heart.  This album is OneWheaton’s truth. “We belong.” We belong in marriage equality and in dialogue with Wheaton College. Consider joining us next year.