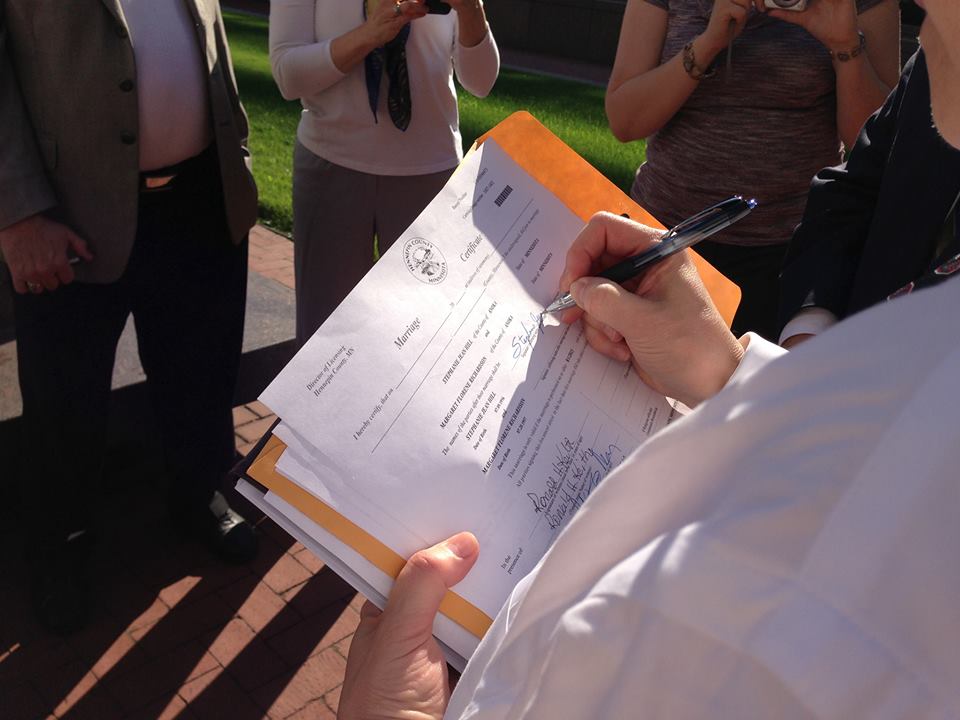 All of my adult life, I have known that I would never marry. Not because I am opposed to marriage – but because I have known, since my freshman year at Wheaton, that I am a lesbian (or “gay,” as I thought of myself back in the 70’s). Yet here I am, in the middle of my sixth decade of life, legally married to the woman I love, with all of the rights, obligations, privileges and emotions that attend that “blessed state of matrimony” (as I used to say when conducting weddings).

How in the world did I get to this place? I am still trying to wrap my mind around this new reality. Early last November, I contributed a post to Untold about the constitutional amendment on the Minnesota ballot, seeking to limit marriage in the constitution to one man and one woman. At the time, just a few days before the election, I wrote, “I don’t know what the outcome of the vote on Tuesday will be. I hope that we will defeat it, but it is hard to be optimistic.” I knew it would be close, but I also knew that in 30 previous statewide votes, the opponents of marriage equality had been successful.

By now, of course, it is well known that Minnesota became the pivotal state that turned the tide. For the first time, a state’s voters refused to enshrine discrimination against their neighbors in their state’s core document. When the TV announced that the amendment had been defeated, we literally jumped for joy (skip to 3:00) and hugged everyone within hugging distance. At the same time, we all realized that there was a hollow core to the victory. On the day after the election, we still had a state law defining marriage as existing solely between a man and a woman. After months of millions of conversations and phone calls and millions of $dollars, we were still second-class citizens, with no more rights than we had the day before the election.

But then a funny thing happened. It turned out that all those conversations had an impact, after all. Public opinion had actually turned a corner. By this spring, the Minnesota legislature took up a marriage equality bill, and public polling indicated that a majority of Minnesotans now favored changing the law. On May 14, 2013, Governor Dayton signed marriage equality into law, effective August 1.

Margo and I, who had publicly committed our lives to each other in a church ceremony in 1996, could finally get a marriage certificate. We were thrilled! At long last, our relationship would get the legal and social validation that only marriage truly affords. We agreed that we would have a simple civil ceremony on August 1, the first day of legalized marriage equality in Minnesota. Even as we prepared for civil marriage, however, we still knew that the federal law would continue to treat us as strangers, with no rights and no recognized relationship. Our marriage, while legal in Minnesota, would still be only a partial marriage. Would we still be married when we crossed state lines? When we dealt with the federal government? In the memorable words of Justice Ruth Bader Ginsburg, ours would be “this sort of ‘skim-milk’ marriage.”

Then came the wonderful day in late June, when the U.S. Supreme Court ruled that Section 3 of DOMA (the “Defense of Marriage Act”) was unconstitutional, and the federal government could no longer treat some marriages as “real marriages” and others as “not marriages.” On that day, our race to August 1st took on a whole new meaning, a whole new dimension of reality.

Margo and I have been married for 17 years in our own eyes, in the eyes of our church and friends, in every way except for the marriage certificate. We have owned our home together, commingled our finances, raised a son together, and have held ourselves out in the community as a couple. As August 1 approached, we planned only a brief, low-key ceremony. We knew that very little would change in our day-to-day lives as a result of a piece of paper issued by Hennepin County.

On the morning of August 1, we dressed for work and headed downtown, as we did every weekday. We had arranged to meet with an ordained friend, a small trio of witnesses to sign the marriage certificate, and little more. Our plan was to get married, sign the certificate, and go on to our jobs. How little did we understand or anticipate the tsunami of absolute, dazzling, untarnished joy that would lift and carry us through the rest of the day. From “I do” to the wedding toast with cupcakes (and a 6-voice chorus of “Forever and Ever, Amen”), I felt that everything was new and real. I am reminded of the way C.S. Lewis described Heaven in The Great Divorce as being hyper-real: harder and sharper than the passengers can endure at first. When I watched the brief video clip that one of our witnesses had edited for us, I had to laugh at the goofy expression that came over my face when the officiant pronounced us legally married. But no one seeing it would doubt that I was genuinely overjoyed.

The thing, all year, that has most impressed us has been the joy that our friends, church members, neighbors – even strangers – share with us. Just as the fight against the consitutional amendment last fall was a community effort by the straight community, the LGBT community and even many churches – so, too, has the push for full marrige equality. When I came to the office after we were married, my coworkers expressed their joy for us all day – including a card and flowers for us. The experience has given me a new appreciation for the social validation that goes with marriage. It is true that nothing else is like it.

“LGBT couples like Margo and [me] want to marry for all of the same reasons that heterosexual couples marry. We want to pledge our mutual love and exclusive commitment, establish legal rights and obligations to each other, and publicly identify as a family unit. We want to right to raise our children together, to have step-parent rights, to file taxes jointly, to know that our partners will be able to receive a survivor’s Social Security or retirement benefit, to transfer property or leave an inheritance without having to pay extra tax penalties. Our children deserve to have the stability and respect of being raised by parents whose relationship is honored and recognized. We want the protection of not having to testify in court about conversations we have had in the privacy of our own home. We need to ensure that we are treated as next-of-kin by health care providers, allowed to visit in the hospital and allowed to make health care decisions if the other is unable. We want the rights and responsibilities of the 1,049 federal laws and 515 Minnesota laws that apply only to male-female couples on the basis of marriage. Most of all, we want our relationship to be recognized in the category that everyone understands: married.”

That paragraph perfectly describes why we did marry. By the time Margo and I were legally married on August 1, we finally know exactly what our marriage means: it means the same thing our straight friends’ and neighbors’ marriages mean. Everyone understands what “marriage” means, and now they can apply that same understanding to our relationship. Yes, after 18 years I still slip sometimes and call Margo my “partner,” instead of my wife. But it is nice to know that I can now truly call her my “wife,” in every sense of that word, and I know that word will, increasingly, become the word that naturally comes to my lips.