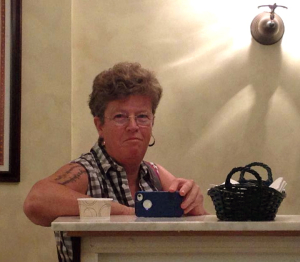 Since the real story is so long, I thought about what I wanted you to know of my very strange, fast, and transitional story from privileged, homophobic, ‘straight’ to exuberant ally.

It was a very difficult journey. It reminds me of the climbing of mount Mordor with your ‘Precious’ in hand. You neither have the desire to go nor the ability to go; but, because there is no way to turn back, you go. For me, there was no way back.

Six years ago we were ready to leave California because we had found the perfect church – Antioch Community Church, our son’s church in Wheaton. Our son kept talking about the guy from church who was discipling him, and when we finally visited the church, it rocked our world.

My husband and I had desired to minister for a long time; he a Marriage and Family Therapist and I, who had been ready for a very long time to escape my accounting career. We were lonely, bored and hungry for the reality of God to invade our planet ….but instead He invaded our lives and turned us upside down, toppling us over and shaking us out to the point we lived daily without equilibrium,

In California, the weight of debt and twelve hour work days was debilitating. My father’s kidney failure was progressing and dementia increasing, money was tight and we grew in our resolve not to pour ourselves into the million dollar house we shared with him. Our roots seemed to be fading with church, work and friends.

By August 2008, Dad had died, our house sold. We became like school kids in love, with the burden of $800,000 dollars of debt lifted, wandering the streets of our city dreaming – dreams that were laden in possibilities of what God had for us. Suddenly the memories of the previous November in Wheaton came back and we found ourselves wanting the last thing we expected: land.

By the next month, Steve flew to a Spiritual Conference in Wheaton and he interviewed at a local clinic. He came home with a job offer, a ministry connection with the pastor, and a chosen house on a half-acre – land. The next month, I went to meet everyone – it was an incredible trip. These people actually lived Acts 2: community, love. Our lives had totally changed, we were going as missionaries to a church in Wheaton. We were infatuated with these people that would be “our tribe” – finally deeper connection: a community.

Now the name of Antioch Community Church brings up nausea. But every night, I dreamed of them in their houses with great waves of warm feelings, week after week after week.

When we arrived in Wheaton in March of 2009, no one but our sons greeted us. No one came to help us unpack. Steve received notice from Illinois that they would not honor his California license. We were to be unemployed for five months. I had promised the church free accounting. They paid me about five dollars an hour in contrast to my CPA billing rate of $ 225/ hr. This was all pointed out to be very spiritual. Our fiscal crash was viewed as a sign of our missionary status.

By July of 2009, Steve had passed his licensing exam as a therapist and started seeing church members, Wheaton students and others as a therapist. In his office, he began to see scores of wounded students mistreated by systemic church practices. In August of 2009, we started the church’s ministry school – the only path to ordination at Antioch community Church.

By the time we finished the ministry school in April of 2010, we saw ourselves as having tools to help heal the church by correcting the systemic errors that were injuring people. On Easter, April 2010, Steve preached the Sunday morning service talking about some of the healing that was needed and the crowd went nuts with applause. But, from that day on my accounting skills were rejected and we were left out of all events that included everyone else in church leadership.

In June of 2010, we made an appointment with the Mr. and Mrs. Pastor and presented a group recovery system to address ways people were being wounded in the church. They decided to consider it over 30 days of prayer. Finally, they decided we could not implement our recovery group system because we had financial problems.

Wait, wasn’t it the financial problems that showed our spirituality?

In October of 2010, my husband Steve met with the Pastor. He told us we were “unfollowable.”

My body began to hyperventilate. Were we crazy? Were they really our dear friends, our life blood? They, for whom we sold everything are they abandoning us? I felt like Alice falling down the rabbit hole, leaving my mind behind. And, of course, that is what we did. We turned over our minds to very devoted, 20 something’s, who were devoted to Jesus or their own authority, and to running a social cult and touting evangelistic efforts without fruit.

We now believe that Antioch Community Church was threatened because we questioned their practices. The church did not want help healing because its methods were directives for a social cult. We both were insulted that day for defending ourselves by speaking truth. There was no sin, but we were expected to apologize regardless of truth.

We did not leave the church immediately, in part because my husband Steve was seeing about 50% of the church in his counseling room. However, shame and disbelief hung on us.

On April 6 of 2011, we received a very carefully worded pastoral letter painting us as deviant members of the congregation.

Over the next year, our minds were really messed up, muffled, our equilibrium ‘off’. Each day we fought for sanity; for how (the fuck) we had arrived in this wasteland of frozen and humid culture shock.

On a whim, I decided to audit a class at Wheaton College that fall. My re-entry into academics cleared my head. When taught well, the History of Christianity shows how unable we are to live in unconditional love; the pure and utter un-Jesus way we humiliate, grieve, marginalize and torture each other emotionally, economically and physically is horrid. Shortly after, I successfully applied to Wheaton’s Psychology MA program so my husband and I could practice ‘soul care’ together.

In Clinical Psychology courses I discovered things that undermined the theological position of LGBT issues I had been taught my whole life. First, there was homosexual behavior in the animal kingdom. I realized: This is not a choice – the right-wing churches have lied to me. Why would the church organization be so scientifically unethical?

Second I found out that Reparative/Conversion Therapy was “not therapy at all”. Instead, it caused psychological harm. As the real time news of the closing of Exodus international and confessions continued to unfold, I found more confirmation of my evolving understanding. I was angry at the church and myself! I had been lied to. I now understood the scientific facts and things began to change.

I had been socialized against sexual minorities. Dobson, others… But I was unclear. I had long wrestled … Jesus would have been in the bars hanging with people … all people. Scripture still said Jesus sets you free you are free indeed… I was no longer willing to settle for anything less than freedom.

One day, I saw a Facebook message from a friend in California. She came out for Marriage equality. I acted, which I seldom do, naive, and asked what made her change her stance. Instead of a scripture by scripture defense, she stated “I’ve wrestled with the topic for so long, and I feel more peace in believing in the legitimacy of gay relationships as a means of honoring, serving and celebrating God”. It was simple and profound. This was the day the scale tipped. I would stand with those who I had opposed and had helped to marginalize. I was grieved by my trespass.

I came out for marriage equality on Facebook. I sent out a number of apologies to allied friends I had distanced from:

I want to apologize to you for my lack of understanding, and arrogance. I am sorry I hid behind the Church and the belief I could “love the person and hate the sin”. I apologize for the hatred of the churches I was a part of to the LGBT community because I did nothing.

In the fall of 2013, I entered my Clinical Psychology program energized by the fear and hope of being known as an ally. I hoped to find ways to act on my convictions. My apologies were not enough. The more I knew, the more I understood the severity of trespass that was committed by ‘us’ by the evangelicalism that I had been a player in for forty years.

In my determination to be an ally, I found OneWheaton. Jordan and I attended all of the OneWheaton Homecoming events in October of 2013. By the time the weekend was over I had a new tribe.

So many of you accepted me so easily, more than in most groups I have been in. In OneWheaton, I have always just been accepted for myself. Now like you, I only feel acceptance and some permission for authenticity among the non-judgmental.

At the Nativity it is announced that the Good news is in fact for all people (Luke 2:10); if it is not inclusive, it is not the Gospel of Jesus Christ. 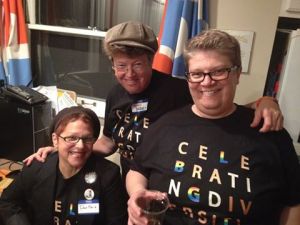