Queerly Christian…And Why it Matters

I grew up in Wheaton. I still consider it my hometown. Immersed in that Evangelical subculture during those formative years, I never realized just how queer Christianity is.

By “queer” I don’t necessarily mean lesbian, gay, bisexual, and transgender. I mean peculiar, strange, disruptive, transgressive, and revolutionary. Or as the great novelist Flannery O’Connor was once reported to have said, “You shall know the truth, and it will make you odd.”

I’m not so sure I would have stumbled into the deliciously queer character of Christian faith if I hadn’t come out as a gay man. That’s just one of the many reasons why I’m grateful for the queerness of my sexual orientation.

Bear with me here for a moment as I outline very briefly what’s so terribly queer about Christian faith and then why it should matter to anyone, including those who have fled anything even resembling Christianity and those who might be lurking around the edges wondering if there’s still something in it for them. This matters as well for our politics and for social policy, in which everyone has a profound stake.

When I came out at Wheaton in my senior year, my world unraveled. Or rather, two worlds collided in that moment – one marked by Evangelical Christian faith and the other, by illicit sexual desire. That collision catalyzed years of study, prayer, and conversation with the hope of drawing those two worlds together into one, of turning the crash site into something like a home. Many others have embarked on a similar journey, charting a path of biblical and theological apologetics toward a Christian homeland harmonized with “homosexuality.”

But rather than finding a “home,” that journey surprised me by bringing a strange new and really queer world into view. Delving into the history of Christian thought and practice rendered the once familiar cadences of Christian faith and spirituality as something like a foreign language in a strange land.

That’s just a tiny sample of Christianity’s queerness and which has been prompting a significant shift over the last fifteen years or so. After decades of insisting that “homosexuals” should have a “place at the table” in Christian churches, religious activists and theologians have been questioning the table itself. Do we really want to sit there? Or to paraphrase Groucho Marx, do we really want to belong to a club that would accept us as members?

I’m not trying to be flippant, nor is this just a theoretical or abstract concern. The ecclesial policies that have kept LGBT people excluded derive from the theologies that have shaped modern western Christianity more generally, including that “table” at which so many of us have yearned for a place. So why would any of us want to sit there?

Thankfully, there’s a far queerer table in Christian traditions waiting to be retrieved, re-appropriated, and reconstructed for today. That’s the work to which I’ve devoted my energies as a theologian for some time now – and that work would not only transform Christian churches, but also reshape our political discourse.

The marriage equality debate is just one among many examples. So, marriage has always been between one

man and one woman? Politicians and religious leaders who say that have clearly never read the Bible, nor studied Christian history, nor consulted any culture but their own. Early Christians were deeply suspicious of marriage; for a good many centuries the best Christian theologians could say about it is that marriage isn’t necessarily a sin.

Marriage is swiftly moving target, historically fluid, always changing, its cultural and religious meaning nearly always up for grabs. Yet one thing does seem to be constant in Christian history about intimate relationships, commitments, and even marriage: All of that is supposed to evoke the human hunger and hope for union with God. I like that. It’s also pretty queer given today’s cultural obsession with marriage.

Gratefully and proudly, I am queerly Christian. And that matters – personally, socially, religiously, and politically. I’ll say more in future posts….stay tuned! 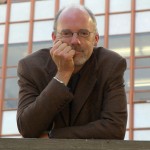 The Rev. Jay Emerson Johnson, PhD, graduated from Wheaton College in 1983 as a biblical studies and theology major. He is an Episcopal priest and a member of the core doctoral faculty at the Graduate Theological Union (GTU) in Berkeley, California. He also serves as Senior Director, Academic Research and Resources, at the Center for Lesbian and Gay Studies in Religion and Ministry at Pacific School of Religion (www.psr.edu), a member school of the GTU. His first book was published in 2005, Dancing with God: Anglican Christianity and the Practice of Hope, and he is the co-editor of a two-volume anthology, Queer Religion (2011). His blog, peculiarfaith, is at www.peculiarfaith.com.