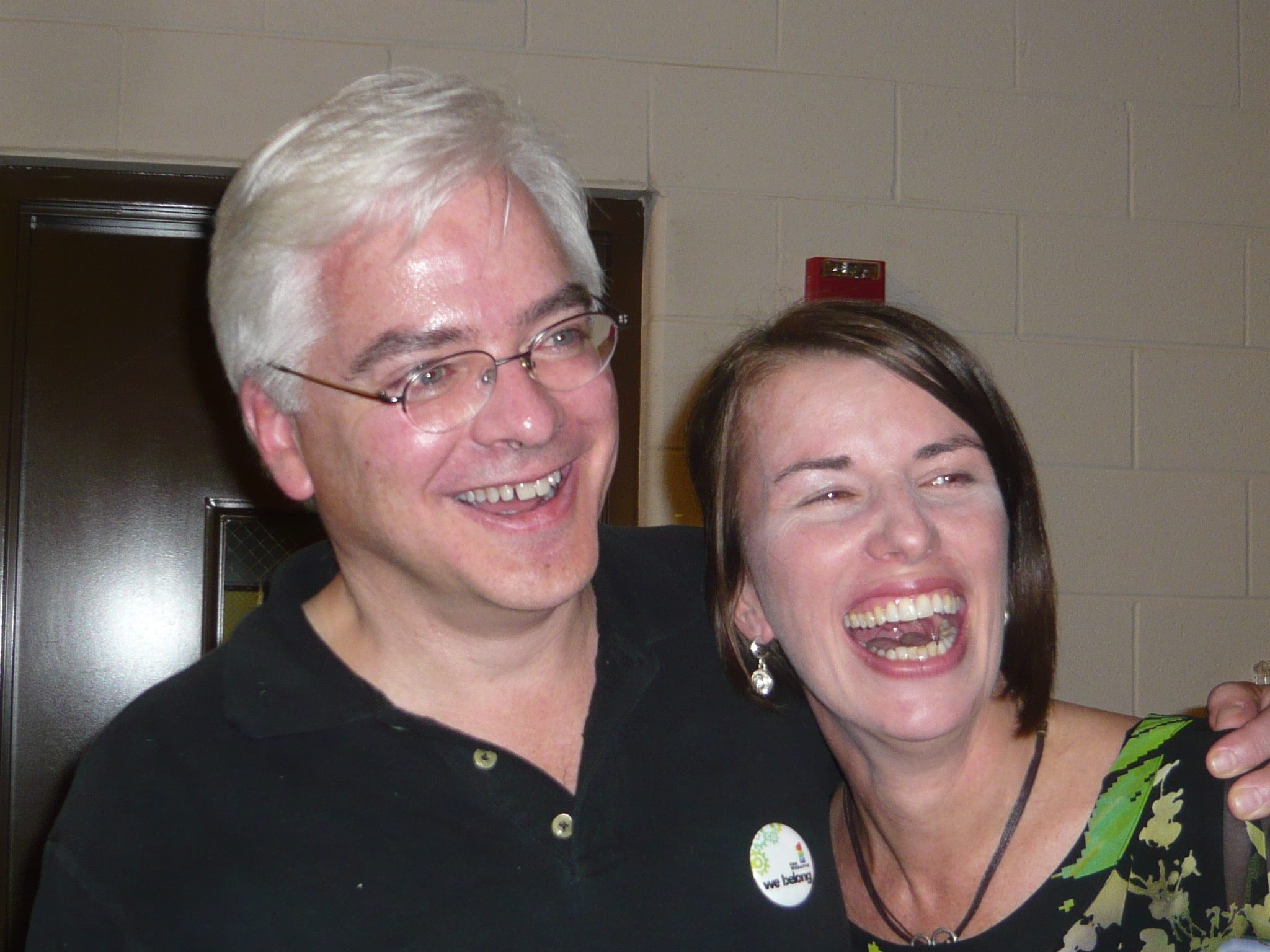 OneWheaton mourns the loss of Mark A. Siemens ’82. Mark died of natural causes on March 5 in his home in Bronxville, NY. He was 53 years old.

An attorney for Shearman and Sterling and later for Siemens Corporation (no relation), he was involved in several high profile cases. As a OneWheaton board member, Mark served as our legal counsel. A regular presence on OneWheaton’s Facebook page, he was a friend to many in our online community.

On March 21, several of us attended Mark’s memorial service at Christ Church, Bronxville. Gathering to celebrate his life, we were there to remember our friend. Following the service, I paused at his memorial table. Sitting among the photographs and mementoes was Mark’s college Bible. Recalling his affection for 1 Corinthians 13, I turned to his favorite passage of scripture.

Underscored in crisp straight lines, were the following words: “If I speak in the tongues of mortals and angels and have not love, I am a clanging cymbal.”

Mark understood love. Commemorating his life, we remembered a kind man who touched our hearts and lives with his friendship and generosity.

A Wall Street lawyer with a heart bent towards justice, Mark was an advocate for social change. Pleased with the work he did for Viacom and Siemens, he was proudest of what he did pro bono.

As the legal counsel for OneWheaton, Mark crafted our current by-laws. As a lawyer at Shearman and Sterling, he assisted New York’s Irish Lesbian and Gay Organization in its lawsuit against the Ancient Order of Hibernians. Barred from the city’s St. Patrick’s Day parade, ILGO argued that the Hibernians had violated its First Amendment free speech rights under the Constitution. Though the suit was unsuccessful, it helped raise awareness of gay rights in New York City. 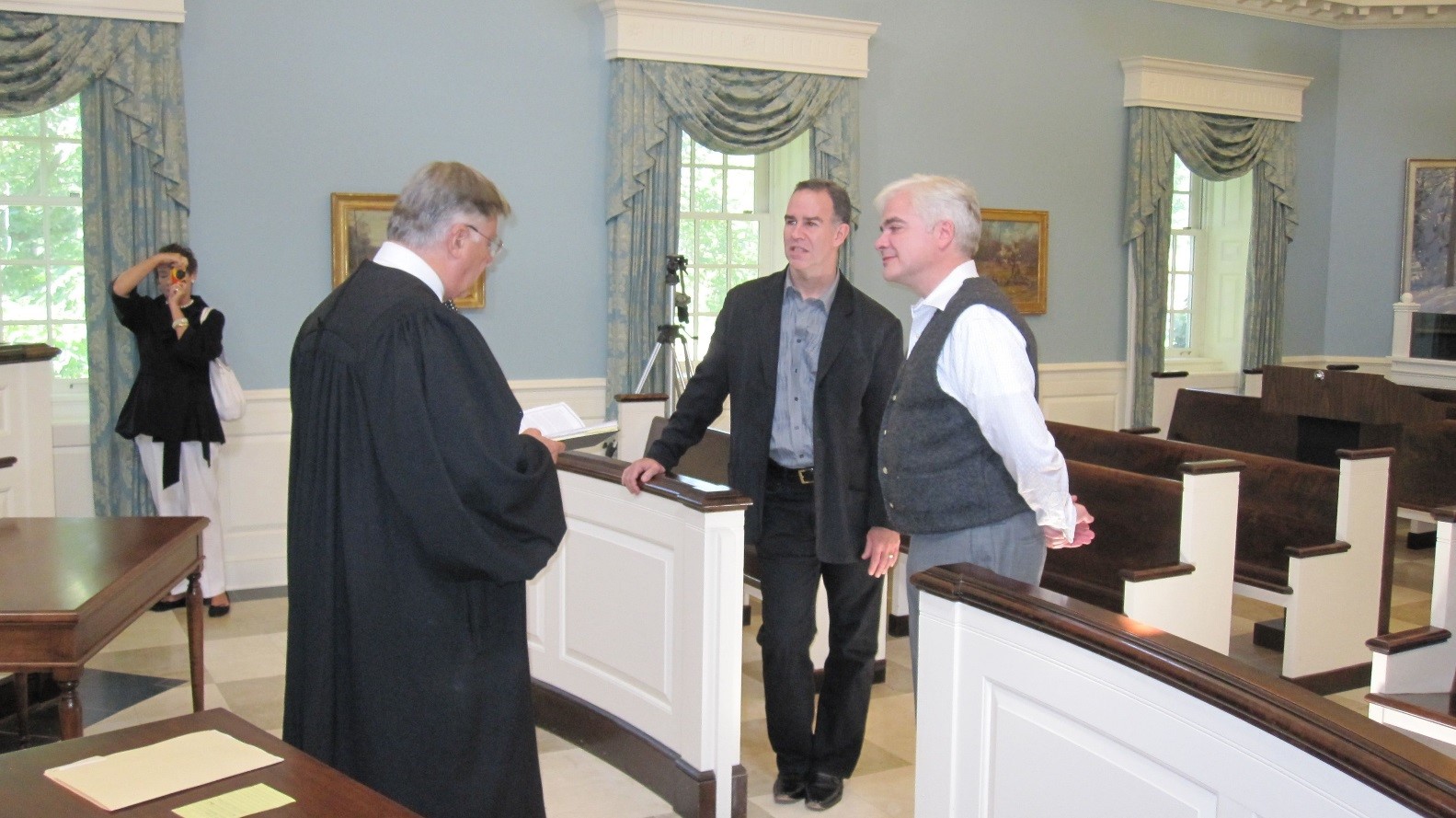 As Mark’s husband and partner, Matthew played an integral role in his legal career. As Mark noted in OneWheaton’s wedding album, “I would not have had the successes I enjoyed if not for his enriching of my life.” Acknowledging that “the life of a NYC lawyer can be brutal at times,” he wrote that “Matthew did everything to make our home life relaxing.”

Overcome with grief, Mark reached out to his friends in OneWheaton. Nurtured by the community he found, Mark returned the gift of friendship. Some met Mark through Facebook. Others connected at OneWheaton events.

Several OneWheaton members had the privilege of knowing Mark in college. Their recollections provide a fuller portrait of the man.

Natalie ’81 described their developing relationship:
Mark was a chemistry major, a year behind me. He and his friend Karl often hung out with me and my roommate Celia. It was all platonic, just gentle kind people who enjoyed each other’s’ company. I went off to med school in Houston, and a year later he moved to San Antonio, which seemed close, but Texas is a big state. We got together a couple of times, and he came to my wedding in Houston in 1983. . . . A couple weeks before I heard of his death, I opened an old recipe file book and saw a recipe for Herman coffee cake, a starter cake that he had given me along with the starter (which I only kept alive for a few months). It was the first time I had thought of him in years. My memories are all fond. I really liked him.

Tony ’82 recalled Mark’s youthful appearance:
I always remembered that Mark was well-liked. People saw his sincerity and heart of gold even then. . . . Mark was ‘carded’ everywhere we went because he looked so young, This happened every time we went to the local theater in Wheaton or the AMC Theaters in Naperville together. He was carded every single time.

Those who met Mark through OneWheaton remembered hearing about his relationship with Matthew. Liz ’86 discovered they had much in common:
I met Mark online at 1W, on my 22nd anniversary. His and Matthew’s was one week later. They met when Mark was in law school, just as Pamela and I met when we were law students. So of course we had to be friends. I miss Mark’s wit, his intelligence, his sense of humor, but most of all his kindness. He was a marvelous virtual hand-holder, and in person last fall, wise, patient and helpful.

Mark’s friends were treated to his quirky sense of humor. Geoffrey ‘81 described an evening spent at the Copacabana in New York City (yes, it still exists). Throughout the meal, Mark sang random lyrics about Lola the showgirl from the Barry Manilow song. Commenting on the food, he pronounced it “surprisingly not bad.”

Mark’s humor helped his friends. Kelley ’82 remembers “our conversations as marked by tears, laughter, and most often, both simultaneously. Rarely did we ever just talk. Mark was one of the few safe people to whom I could express exactly what I thought and felt.”

Ruth ’89 knew Mark for “two unforgettable years,” adding that there was “no particular reason that we should have hit it off, but somehow, we did. We became fast phone buddies. We spoke whenever I was driving to and from work and then some. There wasn’t a detail of my life or his that we didn’t dish about. I could call him at midnight my time (3 a.m. his) after a grueling day of work and be greeted by a chipper, ‘Hello, beautiful!’ Before our conversation would even start, I would already feel better after simply hearing his voice. Sometimes he would call me when he had had a taxing day and the only words out of his mouth were a quiet, deep ‘Make me laugh’ I’d tell him a story of some quirky detail of my day and he would start to snicker. By the end of the conversation, we would both be in billowing laughter.” 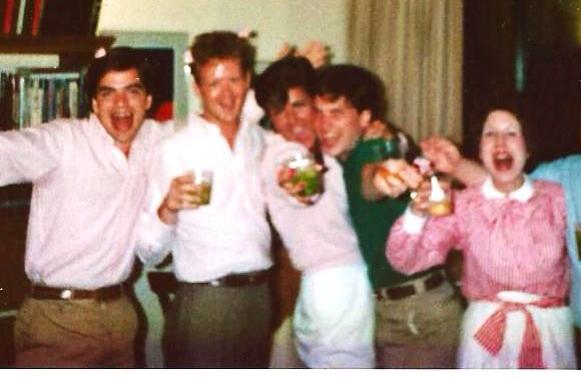 Mark was a generous man, who gave lavishly of himself. Having achieved success, he was willing to share his knowledge and connections with young gay professionals. Recalling Mark’s kindness, Bob Jones alumnus Jeff Hoffman writes:

Mark was generous with his time, with his resources, and with his advice. After hosting a young man from BJUnity, who was visiting New York for a job interview, Mark texted me that ‘we are going to have to mentor him or New York City will eat him alive.’ I’m going to have to do that myself now. I hope my advice is as good as Mark’s would have been.
Stephanie ’78 said his kindness eased her return to the Wheaton campus:
Thanks in part to Mark’s encouragement, I returned to campus for OneWheaton’s Homecoming in 2013 – the first time in 30 years. On Saturday morning, we arrived on campus just as Mark was walking past to the dining commons. Knowing from our conversations how difficult it was for me to walk on campus again, Mark took my hand and walked with me (with Margo on my other side) those long steps to the Commons. That is how I remember him – as a man who, despite his own pain, found meaning and joy in offering help and love to others.

According to Kelley ’82, Mark’s ability to love connected him to people:
I have come to realize that he possessed an inordinately deep capacity to love others. Further, Mark had the rare gift of making multiple people feel as if they were the special friend in his life. Mark’s gift to others—certainly to me—was the gift of himself. For a long time, he seemed to have unlimited energy and drive to be the friend I needed. Since I believe he was simultaneously playing that exact same role for many others, I conclude that Mark had a calling perhaps he did not even realize he had. Mark was called to love and take care of hurting people. If Mark loved you, you knew you had a lifelong friend and champion.

Ruth ’89 echoes this same sentiment:
My daily commute is quiet now and I am yet to find anyone who is happy to hear from me at 3 am. Yet, I feel so blessed. God dropped Mark into my life for a very short amount of time. A few months before Mark died, I mused as to what God’s purpose was for me in Mark’s life. I came to the conclusion that God brought us together so that I could love him and make him laugh. I hope that I fulfilled that for Mark. I know that he did for me.

Like so many OneWheaton members, I came to cherish my relationship with Mark Siemens. Mark was my friend. On one level, our friendship made no sense. What would a retired gay Wall Street lawyer and a straight Missouri mom have in common? Yet, on another level it made perfect sense. We had a connection.

Was it Wheaton? Was it our understanding of pain? Was it faith?

I have come to believe it was grace. In this space, we met each other and became friends— and once we were, it was as if we had always been. It was mutual. One special thing about Mark: he had a way of giving his full attention. All of it. As if you were the only person on the planet. You knew he was really listening to you, that he saw you and valued you.

I learned of Mark’s passing on Ash Wednesday. At his memorial service, we celebrated Mark’s life with the Anglican Easter Vigil liturgy. We are on this side of the veil, Mark, and you have crossed over.

Now you are living the culmination of this: “For now we see in a mirror dimly, but then face to face. Now I know in part; then I shall know fully, even as I have been fully known.”

Mark graced us with his generous, loving spirit and gregarious friendship. He was amazing. He will be missed. OneWheaton is a richer community for having had him within our ranks.

When I remember him, these words remain:
“Schmalzie, I love you.”

Back at you, my friend.