This Tuesday, November 6, Minnesotans (like the rest of the country) will head to the polls to vote for President, Senator, and a host of other offices. This year, however, Minnesotans will also find two proposed constitutional amendments on the ballot. The first amendment, which has garnered by far the most attention, discussion, advertising and political contributions, would define marriage in the Minnesota constitution as solely between one man and one woman.

Lest you should think that you are reading an old post from 2004, I assure you that this is on the ballot in 2012. Minnesota, an historically progressive state—the home of Hubert Humphrey, Eugene McCarthy, Walter Mondale and Paul Wellstone—is voting in 2012 on whether to enshrine discrimination against LGBT couples permanently in the constitution. Recent polls indicate that this measure will win or lose by the narrowest of margins. The public is evenly divided, about 47% saying they will vote for the amendment, a similar number saying they will vote against, and the rest either undecided or declining to answer. Unbelievable amounts of money have poured into this race: at around $15 million total, it is the most expensive ballot battle ever in Minnesota.

But this is a battle that affects families like mine very personally. Minnesota has had its own “mini-DOMA” since 2004, prohibiting recognition of any marriages between persons of the same gender. As early as 1971 (before passage of mini-DOMA), the Minnesota Supreme Court ruled that marriage in Minnesota is limited to a man and woman and refusal to issue a license to two men did not violate the United States Constitution. On November 7, win or lose, I will still be unable to enter into a legal marriage with my partner in the State of Minnesota.

“I never invited our parents or siblings to our ceremony. We did not want to endure the pain of being rejected for “marrying” a person of the same gender.”

Margo and I met at a dance at Vanderbilt University in 1995 and have been together ever since. I was a first-year law student, having spent 10 years in pastoral ministry. Margo was in her final semester of Divinity School. When we moved to Minnesota together, Margo’s 8-year-old son moved with us. A year later, Margo and I stood in our UCC church before God and our friends, pledging our love and life-long commitment to each other. Our commitment ceremony was 15 years ago. Since then, John, the little 8-year-old boy who moved with us to Minnesota, grew up and married. I would offer John as “Exhibit A” to anyone who thinks that gay or lesbian couples don’t 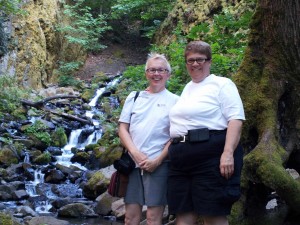 raise children as well as opposite-gender marriages.  He is a responsible and compassionate young man, and we are very proud of him. Margo and I were thrilled to be present with him at his wedding, to share that important day with him, with his bride and their friends and extended family. Margo and I never invited our parents or siblings to our ceremony. We did not want to endure the pain of being rejected for “marrying” a person of the same gender. The friend I had invited to stand with me as my witness, called and backed out just days before our ceremony, deciding that her career would not allow her to support me in one of the most important moments of my life. Although we were joyful, we will forever regret that our ceremony of commitment did not enjoy the same lavish love and support of family that our son’s wedding did.

Fifteen million dollars buys a lot of lawn signs, newspaper ads and TV spots. A few of the ads I see are virulently anti-gay, although the “official” line from the pro-amendment forces has been much more subtle. Today’s TV ad says, “We can support gays without redefining marriage.” I can only think, “How are you planning to support us without giving us equal rights?” The purpose of such an ad is to give an undecided person the sense that voting against marriage rights for gays is not “really” discrimination. It’s “really” about preserving the “traditional” definition of marriage. Since the driving force behind the amendment in Minnesota has been the Catholic church, it is often referred to in this discussion as the “Biblical” definition of marriage. (Apparently these people have never read the Bible, since there are many forms of marriage in the Bible!) I listened to a man testify to the legislature that, if gays can marry persons of the same sex, then his understanding of 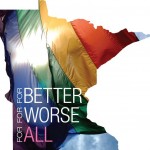 what his and his wife’s marriage meant would be diminished. And I felt sorry for him. Our marriage (for I do consider myself married, whether the government recognizes our relationship or not) is a commitment to love, cherish, protect, care for and honor each other, exclusively, for the rest of our lives. For better or for worse, for richer or for poorer, in sickness and in health, so long as we both live. If that is his understanding of his marriage, then my marriage does not redefine that in any way. It only enriches our understanding of marriage.

“I listened to a man testify to the legislature that, if gays can marry persons of the same sex, then his understanding of what his and his wife’s marriage meant would be diminished. And I felt sorry for him. Our marriage is a commitment to love, cherish, protect, care for and honor each other, exclusively, for the rest of our lives. For better or for worse, for richer or for poorer, in sickness and in health, so long as we both live… my marriage does not redefine his in any way. It only enriches our understanding of marriage.”

LGBT couples like Margo and I want to marry for all of the same reasons that heterosexual couples marry. We want to pledge our mutual love and exclusive commitment, establish legal rights and obligations to each other, and publicly identify as a family unit. We want to right to raise our children together, to have step-parent rights, to file taxes jointly, to know that our partners will be able to receive a survivor’s Social Security or retirement benefit, to transfer property or leave an inheritance without having to pay extra tax penalties. Our children deserve to have the stability and respect of being raised by parents whose relationship is honored and recognized. We want the protection of not having to testify in court about conversations we have had in the privacy of our own home. We need to ensure that we are treated as next-of-kin by health care providers, allowed to visit in the hospital and allowed to make health care decisions if the other is unable. We want the rights and responsibilities of the 1,049 federal laws and 515 Minnesota laws that apply only to male-female couples on the basis of marriage. Most of all, we want our relationship to be recognized in the category that everyone understands: married.

I don’t know what the outcome of the vote on Tuesday will be. I hope that we will defeat it, but it is hard to be optimistic. Every other state that has had such a measure on the ballot has passed it. Can Minnesota be the first state to say “No?” One gratifying aspect of the campaign here (which has been in full swing for over a year) has been seeing how many of my straight friends and acquaintances are really dedicated to defeating this amendment. It has not been left just to the LGBT community to fight this battle. I am thankful and moved by the passion with which many of our straight friends and allies have joined hands with us to work for the cause and decry this discriminatory proposal. I am grateful that they recognize that discrimination against any of us is discrimination against all of us. This is not just a battle for the LGBT community, but for all who value diversity, creativity, openness and the rights of the minority. I appreciate their commitment to making Minnesota a welcoming and open place for all.

“The arc of the moral universe is long, but it bends toward justice.”

But I also have faith. We may win this battle on Tuesday, or we may lose it. But I know that demographics are destiny. Our son and other Millennials don’t even understand why letting LGBT persons marry the person they love is even an issue. To them it is obvious. So I am confident that someday – probably during my lifetime – we will win this battle. Already we have won in a handful of states around the country. And there are three other states with ballot measures this Tuesday – not ballot measures to outlaw gay marriage, but ballot measures to vote in favor of marriage equality! I am reminded of the words of Rev. King, “The arc of the moral universe is long, but it bends toward justice.” Whether we win on Tuesday or lose, our destiny is to win this issue—not just for gays, but for our children, our families, and for a more open and welcoming society.

Folks in Minnesota, Washington, Maine and Maryland have the opportunity to support equal rights for LGBT couples. OneWheaton encourages you to support and celebrate all our marriages.